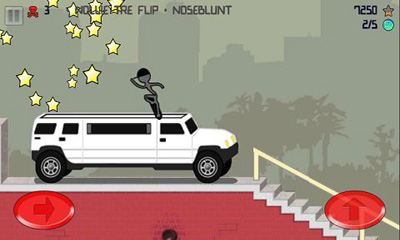 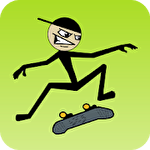 Stickman Skater Pro - is an amusing game in which you should operate an amusing skateboarder. You should slide not only from hills, but also on a handrail and other obstacles. Also you will jump through stages, garbage tanks, barrels with fuel oil and other rolling stuff, thus without forgetting to collect bonuses in the form of coins with smiles. Control system in the game is very unusual: there are two buttons, one of which is responsible for jump power, and the other for speed. And speed depends not on the power with which you press the button, but on the quantity of pressing. In the game you are waited for by 48 levels in different style and a mode of competitions which you can play with the friend on one smartphone. The game possesses simple graphics and original music.