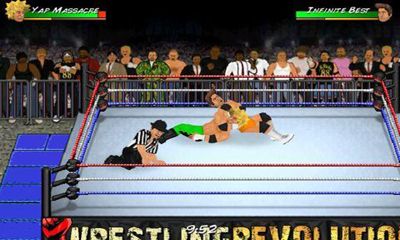 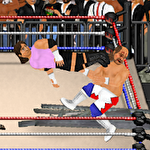 Wrestling Revolution is wrestling on Android. Lead your fighter to the victory! Intuitive control will not cause you any inconvenience, though you will need some time to get used to it. The graphics are not particularly impressive, but fun gameplay makes up for the shortcomings. Astounding fights on different rings and stages around the world in which tables, guitars, cables and crazy tricks are used are waiting for you. The fight will take place around the perimeter of the arena including the auditorium. You will have an opportunity to choose the competitions you to take part in, as well as playing mode. It is understood that career mode is the most popular and the most interesting mode, which needs the most of your attention and time. Create your fighter, make him a unique style and start earning points and win for gaining the highest world ratings to eventually become the most popular and award-winning wrestler. You will finally meet your favourite celebrities you watched on TV every day. Gameplay is rather verified and has a number of advantages. First of all, it is a complete freedom of action and possibilities for creativity. Secondly, it is a full-fledged system of the hero upgrade, which is practically equal to RPG. Thirdly, there is a possibility of qualitative repetitions and record of the fight, which later can be reviewed from all the angles, using stops, delayed effects and approaching.
Rating
?
Votes not enough
0 votes